The Culture of Craft: Craft Breweries Thrive in Muskoka

Back in the 19th century, industrialization began an evolution from the small local breweries of earlier times into large-scale operations; and consolidation, streamlining, and labour cutbacks soon turned the beer industry into a corporate machine that pumped out a limited range of products, always with an eye for the highest profitability. But, around the 1980s, craft breweries started to turn back the clock; and the movement has steadily gained momentum. Brewing practices have come full circle. 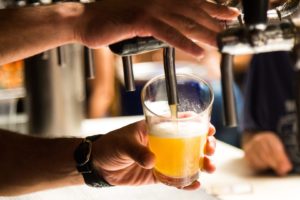 Some social analysts propose that the rising popularity of craft-made goods emerges from a renewed interest in cultural heritage, coupled with greater awareness of environmental and sustainability issues. People care more where their food and drink comes from, evidenced by a surge in artisanal markets. And, as a backlash against corporate marketing, the trend is a declaration of personal authenticity and discerning taste in its resistance to mass-produced merchandise.

On a less lofty level, there is a lot to like when it comes to craft breweries. The executives of Molson or Labatt won’t be stepping out of their offices to chat beer with you, but brewpub owners may be keen for a discussion. It’s an opportunity to mingle in the family-friendly taprooms. And the infinite variety of blends facilitated by the flexible production methods of microbreweries gratifies beer connoisseurs who want to explore new flavours. Nowadays, dinner guests often arrive with a selection of craft beer rather than the customary bottle of wine.

Many urban visitors to Muskoka favour our northern beers and buy them at their city’s liquor stores and pubs. They appreciate the attention that goes into making each batch and warm to the genial atmosphere of the taproom. And they respect the connectivity between the land and the products when ingredients are sourced locally. Muskoka’s four craft breweries all share these characteristics, but they also have their own stories and styles. 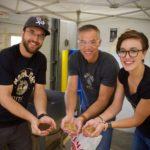 Muskoka Brewery – Established over two decades ago, and nurtured by strong community support in its early years, Bracebridge’s Muskoka Brewery was first to put down roots. “We talk a lot about our beer being a reflection of our geography,” said Todd Lewin, the company’s president. “We use fresh Muskoka water, and all-natural, unfiltered beer is our hallmark.” Todd described how their ‘Venture off the Beaten Path’ branding signifies their identity. “Innovation is in our DNA,” he said, and that innovative pipeline is fuelled by the unique Moonlight Kettle series. Initiated by a grassroots movement, this hands-on experience gives the personnel, from accounting clerks to packagers, the chance to delve deeper into the brewing process. Every month, under the full moon, they can pair with one of the brewers to choose the ingredients and the branding. “Everyone really likes this program,” Todd remarked. “After all, if you’re working here, you should love beer!”

Lake of Bays Brewing Co.  – Darren Smith, a young entrepreneur, opened Baysville’s Lake of Bays Brewing Co. in 2010, forming his plans while still at university in Montreal. Fast forward a decade – Lake of Bays Brewing Company has continued to grow and now employs over 50 people. Darren believes that the craft beer industry is particularly popular in Muskoka because it is an area dear to people across the entire province. “With visitors from so many places,” he pointed out, “it creates interesting branding opportunities.” The brewery’s location makes it very amenable to adventurers, and this attribute is reflected in ‘The Great Outdoors’ tag line. Darren values the collegial spirit that trademarks Muskoka: from his customers to the staff to the local industry colleagues to product partners. In addition to the original Brewery and Taproom in Baysville, the business has expanded to include two brewpub locations: the Huntsville Brewhouse and the Bracebridge Barrelhouse. Each features a microbrewery where they offer barrel-aged and experimental beers brewed on site, as well as the regular Lake of Bays beer lineup. They serve a wide variety of upscale pub fare incorporating locally fresh and seasonal ingredients.

Sawdust City Brewing Co. – Originally known as ‘Sawdust City’, Gravenhurst is home to the brewing company of the same name. Its owner, Rob Engman, and Sam Corbeil, the brewmaster, launched it in 2014, handling the brewing, sales, deliveries, and logistics between them. In a short time, it has grown to a company with fifty employees. Sawdust has now brewed over 250 different distinct beers, as well as six core brands. “Our growth plans include a broader focus throughout Ontario,” explained Rob, “as well as exporting throughout Canada and overseas.” Like other craft breweries, they prefer to source ingredients from the district. For instance, the 2017 limited edition Limberlost Farmhouse Ale used a strain of yeast found in Muskoka’s Limberlost Forest, barrel-aged with rhubarb and strawberry, to produce a distinctive flavour. “There is a lot to be said for small-batch, artisanal products of any kind,” Rob noted, “and this is an industry that creates jobs and inspires a sense of place.”

Clear Lake Brewing Co. – Opened in the summer of 2017, Clear Lake Brewing Co. in Torrance has a taproom and retail shop. The Clear Lake Brewing Co. kitchen is open daily and offers dine in or take out. Or sign up for the ultimate beer experience with a stay at the Muskoka Beer Spa. Owner Greg Knight, is a former cottager who brought his business acumen to Muskoka. The new brewery began with three main beers: a light lager-like Session Ale, a mid-level IPA, and a Cran Radler brewed with berries from Johnston’s Cranberry Marsh in Bala. “We’re always experimenting,” Greg said. “The on-site system lets us test things out, so that we can collect feedback and produce larger quantities if it’s a success.” While the name, Clear Lake, is tied to the landscape of Torrance, it suggests a natural, pure quality as well. “People are returning to a ‘buy local’ philosophy,” observed Greg, “and this works very well for this industry in Muskoka.”

Explorers’ Edge, the area’s regional tourism organization, hosts the Cottage Country Beer Trail, a self-guided mobile tour. The website publicizes product launches, upcoming events, news tidbits, and information about the tour circuits. An excursion through Muskoka’s craft breweries is a wonderful experience: its gives insights into the brewing process, introduces the individuals who make the beer, and offers exclusive samplings. 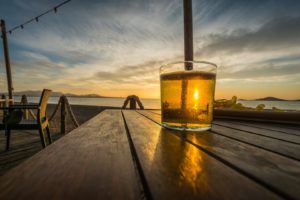 The breweries all hold events at their own locations and participate in local festivals. Huntsville hosts an annual Muskoka 2/4 Craft Beer Festival in the park by the river to celebrate the May 24 holiday; the first annual Muskoka Craft Beer Fest at Gravenhurst’s scenic wharf took place in 2017; and Annie Williams Park in Bracebridge features Session Muskoka, with over thirty provincial breweries. Lake of Bays teams up with the historical SS Bigwin for brew cruises on Father’s Day and in August.

From the iconic lakes, trees, and rocks that beckon to tourists around the world to the progressive environment that attracts enterprising business owners, Muskoka is a special place. It is not surprising that craft brewpubs are an important part of its society, providing employment, contributing to the economy, and creating a community gathering place.
Take a tour; take a taste … and take another look at the vibrant culture of Muskoka. Discover the diversity of Muskoka craft beer on the Cottage Country Beer Trail.