School is almost out for summer—and students at Honey Harbour Public School have summer jobs thanks to a new school project.
The project began when one grade eight student, Jadyn Little, approached his teacher for advice on finding a job. Grade seven and eight teacher Mr. James McIntosh immediately saw the opportunity to turn one student’s question into an extremely valuable lesson. “Everyone uses the skills needed for a job search far beyond elementary school,” said Mr. McIntosh. “We built the unit around other more typical lessons, such as oral language, writing and algebra.”
The unit was broken into small chunks over six weeks, teaching students how to write a cover letter, build a resume, and interview for a job. Working with Ms. Elizabeth Louter, both the manager of Delawana Resort and part-time teacher at Honey Harbour Public School, students narrowed their focus on what employment opportunity suited their skills and interests. From guest representative to housekeeping to minor landscaping, all positions were age-appropriate and close to home.

“I was interested in the landscaping job because it let me work outside,” said grade eight student, Dylan Bourgouin.

With the position in mind, students began crafting cover letters using skills from previous narrative writing lessons. “You want to specify your ability for the job you want,” said Livia Haars, grade seven student. “Cover letters help you introduce yourself, kind of like a hook in a story.”

Students learned how to draw on relevant experience when writing their resumes. “At first, students were concerned that they didn’t have the skills or experience to get summer jobs,” said Mr. McIntosh. “But when we started looking at it, students were well-equipped with experience from working in family businesses and the responsibility that they have at home and school.” 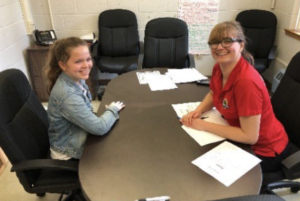 At every opportunity, Mr. McIntosh was there to give feedback and encourage students to help each other. To practice and prepare for their upcoming interview with Delawana Resort, Mr. McIntosh facilitated peer interviews to increase students’ confidence and comfortableness with the interview process. When it came time for the real deal, Jadyn remarked, “The interview felt like two seconds to me. Since I’m old enough to actually accept the job if it was offered to me, I didn’t want to mess the interview up!”
All grade eight students that submitted resumes received job offers at Delawana Resort. Grade seven students that were too young to accept a job offer learned invaluable skills to help them find jobs in the future. “I think it’ll help in the future with jobs,” said Livia. “Having the unit to learn the skills has been really good for us. It helped give me confidence in myself.”
The end of the unit lead into algebra as students used variables such as the number of hours worked to determine how much they can earn over the summer. Jadyn said he plans on saving his money and used math to decide how much he’ll have to put away every paycheque. “I’ll have a weekly limit for what I need,” said Jadyn. “That way, I can save for bigger stuff like an ATV or PS4 Pro.”

“We could apply these lessons to other jobs because they all use the same criteria. We’re better prepared and it helps,” said grade eight student, Hannah Cartier.

All students saw value in the innovative unit. Grade eight student, Madeline Elgar, echoed other students’ new sense of preparedness when she said, “I feel the skills I learned in this unit make me a stronger candidate for future opportunities. My favourite part about this unit is that it resulted in a job, but it also connected to real life skills that everyone should learn,” she continued.

It’s no surprise that parents’ reactions to the new project were overwhelming positive—recent research shows that adolescent work experience can pay big dividends later in life. The study shows that youth job experience leads to a higher chance of being employed—with higher incomes and higher quality job matches—later in early adulthood. This project allowed students to develop skills and gain the confidence they need to succeed. 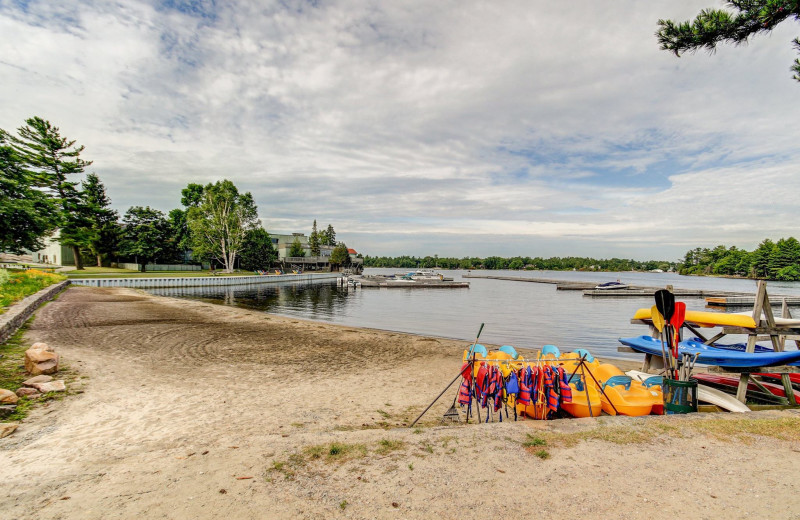 Having a willing community partner was critical to the success of this project. Delawana Resort supplied job opportunities, conducted interviews and ultimately followed through with job offers to eligible students. Delawana Resort is walking distance from the elementary school, nestled inside the charming town of Honey Harbour. Surrounded by water and three beaches, Delawana resort is the perfect summer job.

Follow Honey Harbour Public School on Twitter to keep updated on other projects for students in Georgian Bay and visit Delawana Resort this summer to see the public-private partnership in action.

Rediscover Success in Gravenhurst
Contact Us!
Copyright Venture Muskoka 2021. We gratefully acknowledge the support of Explorers' Edge in the provision of select photographic images.