From serene to stimulating, Georgian Bay inspires creativity in arts and culture. The region’s natural environment flaunts an incredible palette of warm earthy tones, brilliant blues, crimson and gold that attracts many artists. Canada’s most recognizable creators, Emily Carr, Tom Thomson and the Group of Seven, were all known to explore Georgian Bay’s waters, forests and wildlife.

David Milne, another renowned Canadian painter, spent a significant portion of his career in Georgian Bay where he built a cottage to live and paint in. Milne wrote, “If I am allowed to pick my own heaven, this is it,” when describing his home and studio on Six Mile Lake. Inspired by his natural surroundings, Milne produced what some consider to be his best work during that time. As part of a Canada 150 legacy project, local volunteers moved and will restore his 1930s dwelling beside the historic Bressette House in Port Severn for public viewing. The prolific painter was highly influential in shaping the world of Canadian art, and his work continues to be exhibited and studied. The Art Gallery of Ontario debuted the David Milne Centre in 2012 to feature his letters, artwork and other archival items. The rich collection is expansive, covering two floors of the gallery.

“I find endless inspiration in the beauty of the community I live in,” said Braid.

Braid paints in her private studio, ideally located in the Township of Georgian Bay, the backdrop for her art. Her work has been featured in multiple exhibitions at Quest Art School and Gallery. Most recently, Braid took home an award from Quest’s 12th Annual Juried show for her portrait, “Sarah”.

Wendy Wingfelder is another local artist inspired by Georgian Bay’s varied shorelines, lush hardwood forests, and distinctly rugged Canadian Shield. The Wingfelder family history in Georgian Bay began with summer cottage rentals in the 1920s. As the family’s love for the Bay grew, her parents built a charming Pan-Abode which serves as a gathering place for friends and family to this day. Wingfelder's creativity coupled with her love of the outdoors often leads her to plein air painting, where Wingfelder takes her easel outside to capture the true feel of what inspires her. Wingfelder also uses strong visual imagery to work from memory, creating figurative pieces that highlight what interested her most about a scene initially. Several of her pieces represent the best of the Bay, such as American Camp Island and Beausoleil Island.

In Wingfelder's decades-spanning practice, she has participated in countless exhibitions and art auctions. Wingfelder recently donated a third original piece to “Bayscapes” – an annual art auction hosted by Georgian Bay Land Trust (GBLT) that highlights some of Georgian Bay’s favourite artists and local businesses in support of preserving the Bay for future generations. 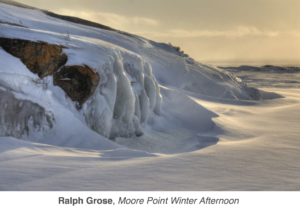 Photographer Ralph Grose was introduced to Georgian Bay as a child. With nostalgic memories in mind, he later returned with his family to settle permanently in Port Severn. Grose's photographs reflect his deep appreciation for the region's fragile beauty and a lifetime of honing his photographic skills. Like Wingfelder, he is an active supporter of GBLT. GBLT’s governed properties have provided many photo opportunities for Grose over the years, including one taken from his cottage shoreline at Moore Point. Motivated by a desire to see Georgian Bay preserved, Grose’s photographs capture the Bay's vibrancy while drawing awareness to the environment's ephemeral nature. Grose's self-published book shares his views of Georgian Bay, with photographs from Killarney to Port Severn.

A Community of Artists

Georgian Bay is a community that celebrates and supports the creative economy. In partnership with Work in Culture, Southeast Georgian Bay Chamber of Commerce hosted free Biz Smarts webinars focused on life-long career development and entrepreneurial business skills for creatives. The digital world presents unparalleled opportunities for artists to demonstrate their talents. Those inspired by the Bay no longer have to leave their muse to reach a broad audience with their art, using Muskoka’s web access to help with issues that have been traditionally challenging such as sales and marketing. 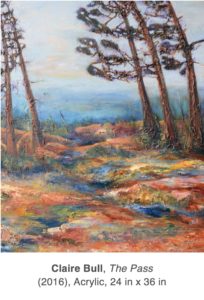 Several creative entrepreneurs are both at-home operators and international traders. Artist Claire Bull spent childhood summers in the Gloucester Pool and Honey Harbour area. She fondly recalls her walks throughout the Township, capturing the essence of Georgian Bay in her art – the sight of her dog covered in snow, the sound of the Bay gently lapping against the shoreline, or the smell of pine throughout her wooded travels. Bull began to “share the beauty she sees,” painting and creating her discoveries through acrylics, mixed media and photography. She then expanded into using digital methods to produce and sell her artwork. Without leaving her studio, Bull uses online marketplaces geared towards handmade and creative goods, such as Etsy and Redbubble, to share her passion on a global scale.

“The world is at our fingertips, which has been a huge boost to those of us who need to create,” said Bull.

Bull’s original creations can be found internationally, transformed from prints to home decor, clothing and fashion accessories.
As part of the Township’s Honey Harbour Waterfront Development Plan, Bull helped facilitate a public visioning workshop to gather community input. With direction from the project facilitator, Bull created a mural depicting the participants’ visions for the site. The mural now hangs in the Township’s Council Chamber as a powerful reminder on how creative tools can be used to actively engage citizens and further community development.

The vital contribution of arts and culture is passionately recognized by the Georgian Bay community. Cognashene Cottagers’ Association hosts Art on the Rocks – a summer art gallery – to showcase the work of artists who emphasize their love of Georgian Bay. Running for over two decades, talented and energetic artists share their passion at the annual exhibition in a variety of mediums, including painting, pottery, jewelry, stained glass, woodwork, photography and culinary arts. The art show and sale is usually held in July on the southern tip of Maxwell/Whalen Island.
Countless generations of artists have been drawn to Georgian Bay to find inspiration. Whether their intentions are entrepreneurial or more leisurely, creative individuals employ arts and culture to actively engage their audience and strengthen and share the community's heritage and identity.